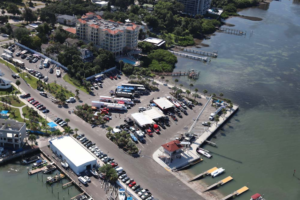 In comparison to last year, the stakes are raised as RWO prepares for a double points APBA National Championship race. The double-point national championship event in Clearwater was voted on after the APBA National Convention in Orlando. Race World is very excited to host the 13th Annual event this coming September. In years past, winners normally earned 100 points for first place, plus one additional point for each boat they beat. In contrast, this year 200 points will be awarded for first place. We are expecting a very large turnout and hope to exceed last year’s great turnout of offshore powerboats.

Last year’s event was a huge success even with the many changes to the multiple dry pit areas. Many teams have already started to register for the 2022 event as well as book their rooms in the St. Petersburg Clearwater Beach area. Teams are very excited to attend this year’s event. Teams in the Super Cat and Class 1 classes have committed early to attend this event and we look forward to seeing additional classes post their schedules before the offshore racing season starts.