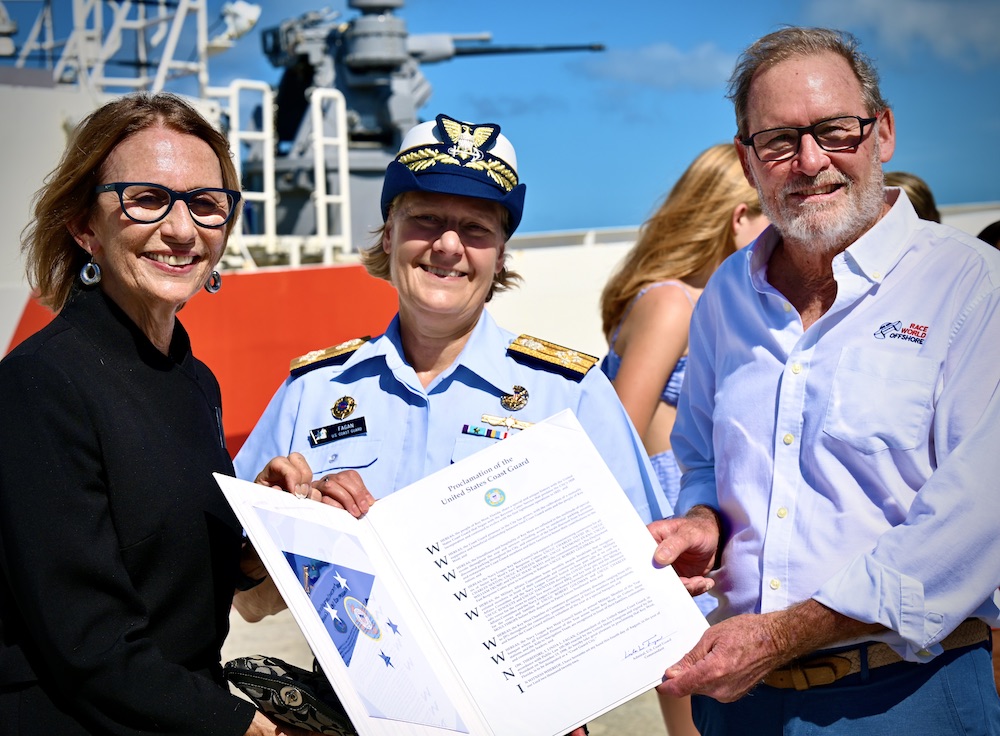 RWO was excited to be on-site at the recent event designating Key West as a Coast Guard city. U.S. Coast Guard Commandant Admiral Linda L. Fagan was the one that bestowed the privilege onto the city. Race World Offshore President, Larry Bleil, was able to meet the Admiral afterward and thank her for her service and her support of boat racing in Key West. There was an abundance of people in attendance ranging from people within the community to military personnel to support the cause taking place. To learn more about the new Coast Guard city, continue reading below.

The City of Key West was honored to welcome U.S. Coast Guard Commandant Admiral Linda L. Fagan as she designated Key West as a Coast Guard City. The Thursday morning ceremony at the Truman Waterfront Park was set off by two fast response cutters, the USCG Cutter Ingham Museum, several smaller vessels, and a USCG helicopter flyover. The turnout of people included a huge swath of the community, representatives of other military branches, and several hundred members of the U.S. Coast Guard.

Admiral Fagan noted that it was befitting to bestow the honor on the 323rd anniversary of the founding of the Coast Guard. Mayor Teri Johnston and City Manager Patti McLauchlin accepted the proclamation. “We are honored – and humbled — to have such distinguished guests visit our Southernmost City,” said McLauchlin, who was on the dais with Admiral Fagan, Mayor Teri Johnston, District 7 Commander Rear Admiral Brendan McPherson, and Sector Key West Commander Capt. Jason Ingram. “Key West has had close ties to the United States Coast Guard for many years,” said McLauchlin. “Indeed, we can trace our relationship back to 1824 when the schooner Florida sailed into Port Key West and established a permanent station here. Today we are very proud to be a homeport to multiple cutters and boats and important shore-based operations.” She gave special thanks to the families of the Coast Guard members stationed here. “Coast Guard members and families are an important part of our Conch Family,” she said. “They play on our sports teams, they volunteer, and they work civilian jobs throughout the city. The Coast Guard and their family members are part of the fabric of our community. We are honored to have you in Key West.”

The Coast Guard has been operating in Key West protecting the nation’s interests since Key West was designated a Port of Entry into the United States in 1823 even prior to the City’s incorporation in January 1828.